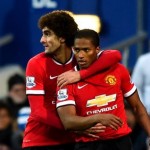 Manchester United goalscorer Marouane Fellaini has admitted that winning at QPR was critical to their season target.

In aiding the Reds to their first league win of the year, the Belgium international believed it proved to be significant as Louis van Gaal’s men look to consolidate their place within the Premier League top four spots.

“It was important to win because we have to keep going,” he stressed.

“We have to win every game to stay in the top four.

“Every team wants to play in the Champions League, so we have to keep going in a lot of games.”