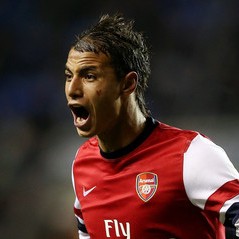 It has been revealed that Fenerbahce are making a move for Arsenal striker Marouane Chamakh.

The Sun reported that the Morocco international has not played a minute of Premier League football this season — and managed just one top-flight start last term.

Turkish Cup holders Fenerbahce are ready to end the 28-year-old’s nightmare with a January transfer bid. Fenerbahce, Galatasaray In Contact With Man Utd For Marouane Fellaini