It has been reported that Turkish giants Fenerbahce are believed to have tabled a £7million offer for Manchester United winger Nani. 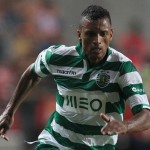 Nani spent the vast majority of the 2014/15 campaign on loan at Portuguese outfit Sporting Lisbon, but is understood to be interested in making the switch to the Istanbul outfit who finished second in the Turkish Super Lig last season.

According to reports from dailymail.co.uk, the 28-year-old Portuguese international has been offered a four-year deal worth £55,000 a week and will travel across the Mediterranean Sea to undergo a medical later this week.

Fenerbache were also believed to have Nani’s Manchester United teammate Robin van Persie on their radar, but it is understood that a deal is unlikely to be completed for the Dutch international.