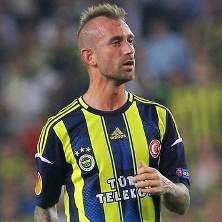 Reports are out claiming that Inter Milan have been offered former Chelsea midfielder Raul Meireles.

The 29 year old Portugal international is desperate to quit Turkish football after his ref clash earlier this month.

La Repubblica claims that agents are now working on an exit strategy and Inter have been offered the chance to take Meireles off Fenerbahce’s hands in January.