As Sir Alex Ferguson said goodbye to his players in London on Sunday night, it would have been no surprise if the Manchester United manager was already considering a more permanent farewell to goalkeeper David de Gea.
Hours earlier the Spaniard’s woeful punch had led to Tottenham’s injury-time equaliser at White Hart Lane, costing his team two points in the Barclays Premier League title race.

Following De Gea’s latest blunder it is understood United will explore the possibility of sending him back to Spain in the summer after accepting that he is unlikely to ever settle on or off the pitch
in England.

There have been concerns for some time that the 22-year-old is homesick. His pop star girlfriend Edurne has stayed in Madrid throughout the player’s time in Manchester and language problems have hindered attempts to bond with many of his teammates.
Since becoming the most expensive goalkeeper in the history of British football at £17.8million, De Gea has also struggled with the challenge of succeeding Edwin van der Sar at Old Trafford and the more physical demands of the Premier League. 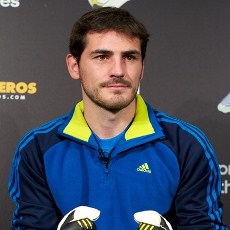 The Telegraph says United are actively searching for an experienced and imposing goalkeeper to replace David de Gea at the end of the season.

While the club have recently scouted Stoke’s Asmir Begovic and Galatasaray’s Uruguay international, Fernando Muslera, it is understood that there is no outstanding candidate to replace De Gea.

The decision by Barcelona’s Victor Valdes to reject a new contract at Barcelona will ensure that United consider the 31-year-old, while the uncertain future of Real Madrid’s Casillas could present United manager Sir Alex Ferguson with the opportunity to recruit a goalkeeper regarded by many as the best in the world.