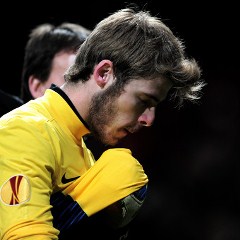 Sir Alex Ferguson is ready to ditch David de Gea – and buy a keeper in the transfer window.

Manchester United boss Ferguson has given the Spaniard every chance to fill the jersey at Old Trafford but doubts about his ability to handle the physical side are growing.

And the shrewd United chief has asked supremo David Gill and the club’s American owners to fund a buy for a genuine number one.

Ferguson is hurriedly looking round for a replacement at the right price and eligible to play in the Champions League.

De Gea and Anders Lindegaard have been chopped and changed this season but both have struggled to establish themselves.

United splashed out on De Gea when Fergie took a chance on his potential and brought him in from Atletico Madrid, but his fragility under pressure has not gone away.

Stoke City’s Asmir Begovic is under review and even Liverpool’s Pepe Reina is a possibility. Both can play in Europe this season.

Begovic has been a giant for the Potters who do not want to sell. Reina’s future under Brendan Rodgers is less certain.