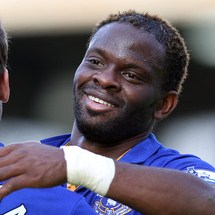 Ex-United forward Saha has shown signs recently of rediscovering his form but the Manchester United boss hopes that does not come to the fore on Saturday.

“We know what Louis is capable of, he has fantastic qualities.

“He did okay the other night when he had a difficult job playing up front on his own, but he’s very capable we know that. It’s our job to make sure we do our best.”