It has been reported that Manchester City’s Fernandinho believes he and his teammates have taken a lot of confidence from last weekend’s draw with Premier League leaders Chelsea. 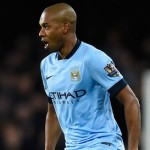 The reigning champions drew 1-1 at Stamford Bridge thanks to David Silva’s 45th-minute goal which came after Loic Remy’s opener four minutes earlier and Brazilian midfielder Fernandinho suggests it has them in good stead for the remainder of the campaign as they chase back-to-back titles.

“When you look and see that it was against the leaders of the Premier League, and they are at home, you can say it’s a good point,” he told the Daily Mirror.

“Going forward our players have quality, and when they feel confidence in our defence they can create a lot of chances. Now we are feeling confident, and that is good for everyone.”

City, who sit second behind Chelsea by five points, host 18th-placed Hull City at the Etihad Stadium this Saturday.