It has been reported that Fernando is happy he signed for Manchester City ahead of Manchester United. 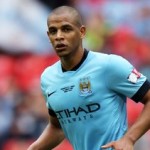 There were reports of former United boss David Moyes wanting to sign Fernando from Porto before his move to City.

He told the Manchester Evening News: “We know the quality they have, the new players they have bought and the challenges we will have to face when we play against them.

“We know that United are going through a difficult time recently – but that can happen to any team. They have good players.

“I’m happy I’m on this side of Manchester. We are doing very well in the Premier League and I hope we can carry on for a long time doing as well as we have been.