It has been reported that Fernando Torres is backing Chelsea’s move for Barcelona midfielder Cesc Fabregas. 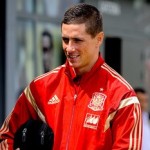 The former Arsenal captain seems set to return to the Premier League, with the Blues closing in on his signature.

“We know Cesc well, he knows the [English] league and he was always one of the best players at Arsenal.

“[Fabregas] likes to play good football and will offer technique, a cutting edge and also goals.

“If he’s made to feel important, a leader – just as he was when at Arsenal – he can drive the team on and he’s a type of player Chelsea don’t have right now.”