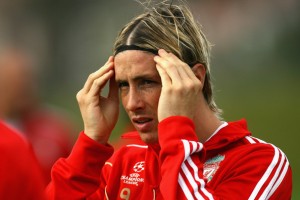 Liverpool manager Rafael Benitez is fearful that star striker Fernando Torres could miss the rest of the Premier League season and the World Cup for Spain as surgery could be necessary to repair his knee injury.

The Spaniard has been unable to see his doctor in Barcelona due to the flight ban in Britain, but Liverpool’s medical staff think that an operation on the knee might be needed.

If the Spain international does indeed go under the knife he will certainly be unable to compete in the Reds Premier League and Europa League games, and could be unavailable for his country at the World Cup this summer.

“We are not sure whether he will play again this season,” Benitez told The Mirror.

“He needs to see the specialist and he will tell us whether Fernando needs an operation and when he will be back.”

There was some hope that Torres could be back against West Ham United on Monday night but t now there are fears that the Spaniard could be out for the considerable future.