It has been reported that Fernando Torres is determined to rebuild his career at AC Milan. 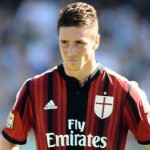 On-loan from Chelsea, the Spanish international striker was dropped for Milan’s draw with Fiorentina on Sunday.

He said: “Personally, I’m feeling better every day. I’m adapting to a new League. This week we are playing three games and the Coach said that he would have needed everybody and in this game I had to start from the bench.

“This is part and parcel of the challenge though because I haven’t come here just to pass the time, but because I want to leave my mark.

“I’m proud of what I’ve achieved in Spain and in England in my career and I’d like things to go likewise in Italy too.”

Eden Hazard Set To Be Fit For Atletico Madrid Clash