It has been reported that Chelsea striker Fernando Torres is excited about his two-year loan move to Chelsea. 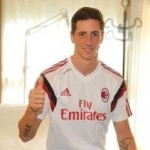 The Rossoneri confirmed on Twitter on Saturday that Torres had landed at Milan’s Linate Airport, where he was greeted by 200 fans, and posted a picture of the player holding an AC Milan scarf before announcing he was at the Madonnina Clinic undergoing his medical.

The Spanish international told the Milan Channel he could not wait to get started working under coach Filippo Inzaghi after a frustrating and underwhelming three and a half years at Stamford Bridge.

“I’m really happy to have arrived in Milan,” he said. “I can’t wait to do the medical, meet the fans and my new team-mates.

“I cannot wait to start this new adventure. I spoke to the coach (on Friday) and I am really pleased to work with a coach like him. He was a great goalscorer and definitely understands what the role of a striker is. I am sure that he can teach me and help me a lot in this adventure.”