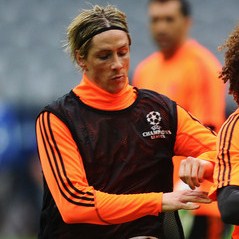 Fernando Torres has declared that he is committed to Chelsea.

The departure of Didier Drogba gives the £50million British record transfer the ideal opportunity to secure his position as first-choice striker after a difficult 16 months since leaving Liverpool.

The Spanish international striker said : “At Chelsea I am very happy and I never said the opposite,”.

“I still have a lot to do in this club. It has been a difficult year, I didn’t play much and my mind was like a roller-coaster.

“I believe that I deserved to play more. I felt very bad and I would not like to feel that way again but I have never surrendered and I never will.

“When Chelsea signed me they did it with great expectations, and the confidence of the owner and the fans has been unconditional, but my role in the team has not followed that line.

“I look at myself and think I have not known how to be essential for the coaches I’ve had and this is another goal to accomplish which I will, at all costs.”