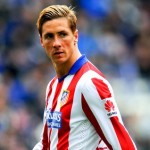 Atletico Madrid striker Fernando Torres has declared that they are determined to stall Barcelona’s title push.

Barca go into the penultimate round leading nearest challengers Real Madrid by four points, so a victory over third-placed Atletico at the Vicente Calderon would guarantee they finish top.

Atletico, though, are not about to hand their crown over without a fight and Rojiblancos striker Torres said: “I hope that they don’t win it here.

“We hope to win the game ourselves and assure ourselves of third place. But football is like that. Atletico became champions last year at the Nou Camp and, as football and fate would have it, Barcelona have the possibility of becoming champions at our ground.

“But that does not tell us anything because we are fighting a different war, to win to be third and achieve our objective.”