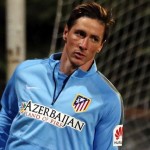 Reports are out claiming that Atletico Madrid signing Fernando Torres has paid tribute to his former Chelsea gaffer Jose Mourinho.

The Spanish international striker is pleased to be back at the club he left for Liverpool in 2007 but he has quashed suggestions that he was forced out of Stamford Bridge by Mourinho.

He said: “The press will always try to make stories but the truth is Jose and I have a very good relationship. We shared a relationship of honesty and trust. I have nothing but respect for him and I am sure that he feels the same.

“There is no truth about him forcing me out of Chelsea. I wanted to play regularly and he was honest with me and told me he couldn’t promise me that. If he is ever in Madrid I would buy him dinner, we are friends.” Chelsea and Arsenal could be forced into a play-off