Reports have surfaced claiming that Fernando Torres is set to start for Chelsea today against Hull City. 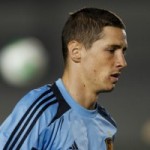 The Mail on Sunday reported that the Spanish international striker is expected to start for Chelsea after Jose Mourinho favoured the Spanish striker over Demba Ba and Romelu Lukaku in training.

The former Liverpool star was expected to be the prime casualty of Mourinho’s regime but with Chelsea having failed to add to their strikeforce, the Spaniard seems in prime position.