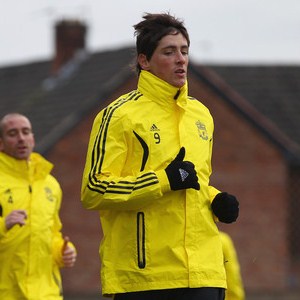 It has been confirmed that Fernando Torres will start tonight’s Europa League dead rubber against Dutch club FC Utrecht at Anfield.

Liverpool manager Roy Hodgson believes the match is a good chance for the Spaniard to turn around his poor recent form and get back to his known goalscoring ways.

The former Atletico Madrid striker has not scored in his last four Liverpool starts but it is the manner in which he has been scuffing chances he usually tucks away that is most worrying.

Hodgson says the Utrecht fixture could be a real confidence-boosting experiment for the usually reliable Torres.

“This is a good opportunity,” said Hodgson.

“Having had a chat with Fernando, I think he’ll enjoy it. I’m hoping things will go okay and I can move him out before the end of the game.

“He’s happy to play and he wants to play so, with David Ngog not being fit, I think it would be foolish of me not to use him.

“He is a lot fitter than he was at the start when we were really just trying to wrap him in cotton wool,” the Reds boss added.

“He had just come back from the World Cup and our medical staff were concerned about him playing three matches in a week. But he is fitter and stronger now. Fernando knows how well he’s played in the past and when things are not going well for him he is the first to recognise that.

“I am hoping he’ll have a good game that will improve his confidence. There’s nothing to lose. I’ve said to Fernando that we believe he’s a very fine player.

“He is one of the best front players in Europe and the fact that maybe he has not played at his level over the past couple of months doesn’t change that.”