Reports are out claiming that Feyenoord are hoping to sign John Guidetti from Manchester City. 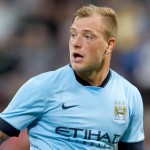 The 22-year old Swedish international had a successful loan spell with the Rotterdam outfit in the 2011/12 season and is wanted back at De Kuip by last term’s Eredivisie runners-up.

However, Guidetti, who scored 20 goals in 23 outings for Feyenoord a few years ago, would cost the Dutch club around €5million which could be a stretch for van Geel’s men at this point in time.