Reports are out claiming that Feyenoord technical director Martin van Geel admits the club is keen on Colin Kazim-Richards. 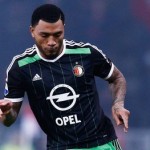 The English-born Turkish forward is currently on loan with the Dutch club from Turkish side Bursaspor but could join the Rotterdam outfit permanently on a free transfer in the summer.

“We can get him for free – we’ll try to keep the best players.”

Former Brighton and Sheffield United forward Kazim-Richards, who spent time with Arsenal’s youth academy more than 15 years ago, has scored 10 goals in 20 Eredivisie outings for Feyenoord this term. Besiktas Boss Slaven Bilic To Be Banned From Arsenal Touchline