It has been reported that FIFA have brought forward their discipline action against Liverpool striker Luis Suarez. 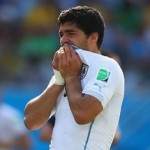 FIFA have fast-tracked their investigation into Suarez’s apparent bite on Italy defender Giorgio Chiellini and set the Uruguay striker a deadline of 9pm to respond to the claims.

“It is working to get and assess all elements in order to make a decision as early as possible, particularly given the fact that Uruguay are still in the tournament.”