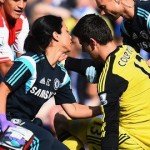 Courtois hurt his head in a collision with Arsenal forward Alexis Sanchez during Chelsea’s 2-0 Premier League win on Sunday but played on after being assessed, only to be forced off 14 minutes later.

Chelsea came in for criticism for leaving Courtois on, but D’Hooghe told journalists at the Leaders Sport Business Summit in London: “I think sincerely that, first of all, the team doctor did a correct examination.

“She came to the conclusion that he could go on, but she kept an eye on him and from the moment he didn’t feel well – which can happen in concussions – they took the right decision to take him off.”