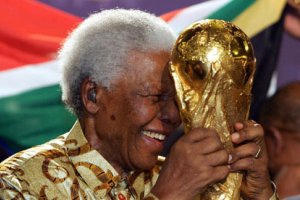 The iconic anti-apartheid leader’s great granddaughter died in a car crash on the eve of the opening ceremony Mandela had originally planned to attend.

There had been reports the 91-year-old was set to attend the final but his family have now thrown that into doubt by claiming football’s governing body are putting him under too much pressure to attend.

Mandla Mandela said : “The family has really taken a step back from a lot of activities and we’ve been mourning the loss of Zenani,” .

“So we’ve come under extreme pressure from Fifa requiring and wishing that my grandfather be at the final today.

“But I think that decision will solemnly lie with him, how he wakes up today, how he feels, what his medical team says, but as well his family.

“They (Fifa) said that (president) Sepp Blatter wished that my grandfather comes out to the final.

“I think people ought to just understand the family’s traditions and customs and understand we’ve had a loss in the family and we are in mourning and that for me would be enough reason to leave the family to be for now.

“Their focus is having this world icon in the stadium, yet not really paying attention to our customs and traditions as a people and as a family.”