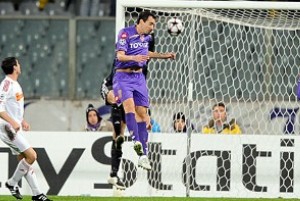 A devastating second-half spell put Fiorentina on their way to a third straight Champions League victory as they closed in on a quarter-final spot.

With Liverpool only drawing against Lyon, the Viola moved five points clear of their Group E rivals thanks to another goal fest against basement boys Debrecen.

Fiorentina beat the Hungarians 4-3 away in the last round of matches and it was a similar story today.