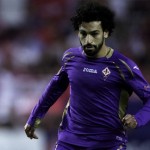 It has been reported that Fiorentina are baulking at Chelsea’s asking price for Mohamed Salah.

The Gazzetta dello Sport suggests that la Viola are keen to sign the Egyptian winger permanently but do not want to pay the £12million the Premier League champions have quoted.

Salah, who joined the Blues from FC Basel in January 2014, spent the second half of last season on loan with Fiorentina and impressed by scoring nine goals and lodging four assists in 26 appearances in all competitions.

It is believed that Fiorentina have competition from Atletico Madrid and Wolfsburg for the 22-year old who cost Chelsea £11m a year-and-a-half ago.