Fiorentina sporting director Daniele Prade has has denied reports claiming that he is after QPR goalkeeper Julio Cesar. 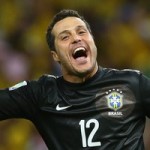 The Brazilian international goalkeeper has reportedly emerged as a summer transfer target for La Viola but Prade has poured cold water over the rumours.

“I have never contacted either QPR or the agent of the Brazilian goalkeeper,” he told Sky Sport Italia.

Cesar, who joined the R’s from Inter Milan last summer, was also linked with Arsenal and Napoli earlier this summer.