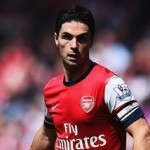 The Daily Star reported that the Viola will move for the 32 year old if they cannot agree a deal for Manchester United’s Marouane Fellaini.

It is said that Fiorentina gave a chance to United-misfit Anderson last season as they took the Brazilian on loan with a view to a permanent transfer.

Anderson returned to United at the end of his spell as the Serie A club decided not to take up their option to make the move permanent.

Reports also claim that the Italian giants will try to convince Arsenal midfielder Mikel Arteta to join them if they are unable to secure a move for Fellaini.