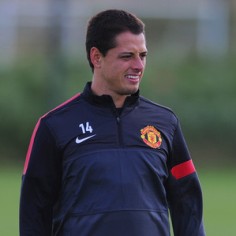 Reports are out claiming that Fiorentina must make room in their squad if they’re to bid for Manchester United striker Javier Hernandez.

Gazzetta dello Sport reported that Fiorentina are keen on the Mexico international and believe they can land the striker for £8 million.

But with their non-EU slots filled, Fiorentina would have to sell one of their non-European players to make room for Chicharito in January.

Hernandez is contracted to United until 2016.