It has been reported that Fiorentina have tabled a contract offer to Chelsea striker Samuel Eto’o. 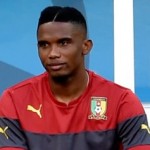 The Cameroon international’s deal with Chelsea expires next week and he will be leaving the London giants.

Gazzetta dello Sport says Fiorentina have made the 33 year-old a one-year contract offer worth €2 million.

However, the striker is seeking €3.9 million-a-year and is also in contact with AS Roma and AC Milan about next season.