Mathieu Flamini is convinced that Arsenal have the quality to upset Champions League opponents Bayern Munich. 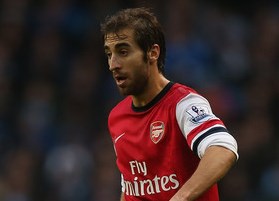 The reigning European champions eliminated the Gunners at the same stage last term, but midfielder Flamini believes this season they can secure a shock and progress.

“We know it won’t be an easy game because Bayern are a very strong team, but we are Arsenal, we have big ambitions,” the Frenchman said ahead of Wednesday’s first leg at the Emirates Stadium.

“If we want to qualify, we have to get a good result against Bayern.

“This year, Arsenal have a lot of ambition and are fighting for the league title. We have qualified in the FA Cup and we will do everything to qualify in the Champions League.

“We know it will be a difficult game and now it is important to recover very well because we had so many games. Today, we will start thinking about Bayern.”