Reports are out claiming that Arsenal midfielder Mathieu Flamini has refused to pin the blame for the 2-1 defeat against West Bromwich Albion on Saturday on his teammate Santi Cazorla. 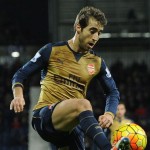 The Spanish international slipped backwards and missed an 84th-minute penalty as the Gunners missed out on a great chance to move to the top of the Premier League table.

“The penalty – it can happen – and there is nothing you can do about Santi falling,” Flamini said.

“We tried and tried and tried until the last minute but we can’t give any excuses – we lost the three points. It’s a shame because we started the game well, we went 1-0 up, and then after it became more difficult for us.

“We tried to push on in the second half, had some opportunities, but of course, it is disappointing because we didn’t get any points.

“Sometimes it happens, and now it is important to recover and focus on the next game.”