Reports are out claiming that former Arsenal striker Eduardo has quit the Croatia national team. 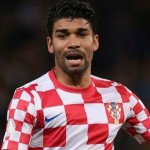 The 31-year-old claims that the involvement of officials from outside the squad forced him to reassess his involvement following the 2014 World Cup in Brazil.

“I inform the Croatian Football Federation that I don’t intend to play for the team in which I played 64 times since the first appearance in 2004,” Eduardo said in a statement.

“I was selected 64 times in the last 10 years, from my first match for Croatia against Ireland in 2004. I scored 29 goals, which makes me the most prolific active striker in the team.

“During the past few years for me there were several very hard moments … which are consequences of activities of people who are formally not part of the squad but have a big influence on its work and officials.

“I believe that I’m deprived of a fair and honest treatment.” he added.

“With great pride and joy I played in the Croatian shirt and presented Croatian football around the world. It was important to justify the trust that the fans gave me for which I am especially grateful.

“I’m in the team among players, coaches and many other people (medical staff, technical staff, and others) who are very much, everyone in their own way, important and I made many friends.

“I also thank all the coaches who had faith in me. I will remember playing for Croatia only in a nice way.”