Reports are out claiming that former Arsenal, Manchester City and Tottenham striker Emmanuel Adebayor is expected to sign for Aston Villa. 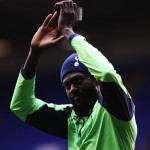 The Daily Star Sunday reported that the Togo international has been without a club since Spurs released him in September and he can’t join another club until January.

“I know Adebayor. I know him.”

But despite the departure of former Spurs boss Tim Sherwood, who wanted to sign Adebayor in the summer, the Togolese striker could still join Villa.

Theo Walcott : Gervinho Will Be A Breath Of Fresh Air