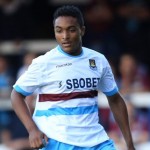 Reports are out claiming that West Ham United have secured striker Jordan Brown to a new deal.

Brown has signed a new contract with West Ham which will keep him at the club until June 2016.

The 18-year-old striker has scored three goals in seven starts for the Development Squad this season prior to putting pen paper on the new deal.

The former Arsenal forward told the club’s website: “I’m delighted to have signed a new contract. I’m happy the club has faith in me to give me another year to push on and try and prove myself.

“I heard I was going to get a new contract in about January or February and I was very happy. I’ve known about it for a while but it’s good to actually sign it.”