It has been reported that Sir Alex Ferguson has praised the work done by Louis van Gaal in his opening months as Manchester United manager. 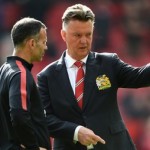 The Dutch tactician has added a group of quality signings to the squad he inherited from David Moyes including such names as Angel Di Maria, Radamel Falcao, Ander Herrera, Daley Blind, Marcos Rojo and Luke Shaw which has Ferguson excited.

The Red Devils struggled early in the new campaign but have hit back well to be currently sitting fourth on the Premier League table courtesy of three wins from their past four outings with Ferguson lauding van Gaal for his guidance thus far.

“Louis van Gaal has made a lot of changes and, thinking about that, actually, maybe he’s doing the right thing — to clear the decks and build his own team,” said the great Ferguson who retired from management after winning the 2012/13 title.

“Because he’s got the experience and coaching ability to do that. The way he’s approached it, I think he has been brilliant.” Man Utd Not Happy With My Boxing – Wayne Rooney