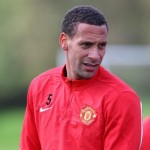 Reports are out claiming that there aren’t expected to be any hitches to Rio Ferdinand’s move to QPR.

The Mail on Sunday reported that the former England international centre back is poised to agree a move to Loftus Road.

Ferdinand has been playing a return to the London area for some time when he knew he wouldn’t get a new deal at Manchester United.

A luxury mansion on the Farnborough Park estate on the south east London/Kent border near the M25 is close to being fully renovated.