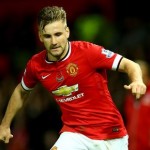 Reports are out claiming that Former Manchester United fullback Arthur Albiston has been impressed by Luke Shaw this season.

The England international arrived in the summer from Southampton.

“We have seen him play over the last two or three seasons in Southampton’s first team, but prior to that in the Academy teams and he always looked like a Rolls Royce kind of player,” Albiston told United Review.

“He has got a great physique on him, he looks so smooth in the way he runs and he’s comfortable on the ball when going forward. He reminds me a little bit of Stuart Pearce because he will give you a kick when he needs to, so there is no problem there. He can play here for the next 10 years if he stays fit.

“I think in every game he has played, at least when he has been fit, he has looked more and more confident. Obviously, getting a move to a club of this size is a little bit different to playing at Southampton. You are always expected to play well here, win matches and then lift trophies as well.

“But Luke will get used to that without a problem. He has also got himself into the international set-up and I am sure he will become a fixture for England over the next 10 to 15 years. All in all, he is making great progress and I am sure there is still a lot to come from him.”