It has been reported that former Stoke City defender Danny Higginbotham has hit out at Arsenal and their fans. 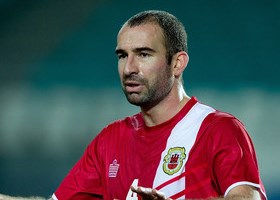 Higginbotham wrote in The Sentinel: “The first thing to say is I don’t think they will win the Premier League because they haven’t got the strength of character to see the job through.

“The second is to criticise those people who keep banging on about Ryan Shawcross and the challenge on Aaron Ramsey.

“That broken leg of his was an horrendous injury, but it was not an horrendous challenge and it was four years ago for goodness sake.

“But every time Stoke v Arsenal is mentioned, people want to throw mud at the club in general and Ryan in particular.

“I did my cruciate ligament against Chelsea a few years back, but no-one banged on about that every time we played Chelsea.

“Remember when Rory Delap had his leg broken in two places on his Stoke debut against Sunderland?

“That was every bit as bad as Ramsey’s injury – the bone was nearly sticking out of his leg – but was that incident brought up every time we played Sunderland after that?

“Of course not, and nor should it have been.

“That challenge on Rory was accidental, just like Ryan’s was.

“I know Ryan Shawcross and he wouldn’t do anything to hurt anybody.”