It has been reported that AS Roma captain Francesco Totti is delighted with their start to the season. 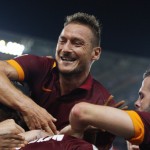 The Serie A side meet Hellas Verona this weekend.

“Again this season we started off on the right foot,” Totti told Roma TV.

“We picked up four wins out of four, under more pressure as everyone expected the same start as last year.

“We have a great group of players, a competitive squad and we also expect to do great things together.

“At the start of a campaign you have objectives and the important ones are the Scudetto, the Champions League and the Coppa Italia, which is still a trophy.

“It’s easy to talk now, but at the end of the day the definitive results are given by what happens on the pitch.”

Philippe Mexes Ready To Open Contract Talks With AS Roma Arsenal To Go Head To Head With Roma For Adrien Rabiot Chelsea To Include Romelu Lukaku In Bid For Mehdi Benatia