Francesco Totti insists that he is feeling happier at AS Roma. 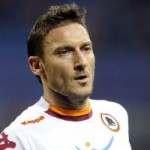 Earlier this summer, the 36 year old had become unsettled at Roma over the changes the club’s new owners were bringing through.

However Il Tempo claims that after their tour of the US, Totti is returning to Italy in far better spirits and is now keen to discuss a new contract.

Roma president James Pallotta is set to take charge of negotiations personally to make sure Totti is 100 per cent satisfied with what the club is planning for the future.