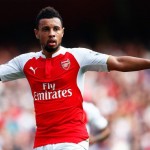 Pires is considered to be one of English football’s best foreign imports and still trains often with the Arsenal players.

And Coquelin feels Pires’ help has been hugely beneficial to him personally.

“I have good people around me; Robert Pires gives me tips and advice,” the midfielder said.

“He is a French player and as a young kid I was watching him play for France a lot. It’s always nice to get tips from someone like that.

“He’s quite honest and if you haven’t played well he’s not going to hide it from you.”