Reports are out claiming that Francis Coquelin has signed a new deal with Arsenal. 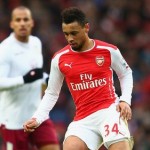 The Frenchman has been one of the surprise stars of this season, making the holding midfield position his own in recent weeks.

“This is what is magic about football: one day you are unknown and the next day you are a bit bigger,” Coquelin told the club’s official website. “I’m really pleased, I’ve been here since 2008 so it feels like a second home for me.

“It wasn’t really a tough decision, I have been here long enough and I know everyone here.”