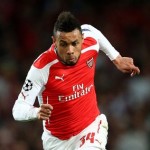 The French defensive midfielder saw a loan at Charlton Athletic cut short earlier this season ahead of making his Gunners debut. He hasn’t looked back since.

“When my loan was finished after the first month, I could see the injuries at Arsenal. Mikel Arteta was out, Aaron Ramsey also. When they were happy to extend my loan in those circumstances, I thought: ‘Maybe I won’t get the chance now’.

“When you are in the last year of your contract and you are not playing regularly, you are thinking, ‘That’s a shame but it might be the end’.

“But in football, you never know what can happen. I went straight into the squad against Newcastle and played a few minutes against them and Liverpool. Then the West Ham game changed things.

“He [Wenger] started me, things went well and we got the points. After that, I played in most of the games.”