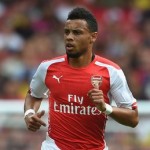 Reports are out claiming that Francis Coquelin is delighted with his current chance at Arsenal.

The French midfielder again featured in victory over Stoke City on Sunday.

Coquelin told arsenal.com: “You know the midfield is always going to be a battle in every single game, especially against Stoke. They’re a physical team but I think everyone is very pleased to get the three points and now we move onto the next game.

“As long as the team wins, I’m happy, so if I can help the team, I just give the best every time I’m on the pitch.”