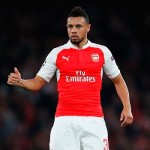 Reports are out claiming that Arsenal midfielder Francis Coquelin says they won’t be underestimating Manchester United.

The Gunners meet United on Sunday.

“I think it’s been a difficult (season) for Man United but in big games like this, we know that they’re going to turn up, because everyone loves these kind of matches,” Coquelin told the club’s website.

“It would be a massive win for them to beat us. But we’re going to be ready.

“Man United are always going to be a great team. Even if they had a bad spell, they still have a strong squad.” Arsene Wenger In Contact With The Agent Of Alexis Sanchez