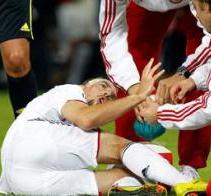 Bad news for all Bayern Munich fans as France playmaker Franck Ribery had to be helped off the field after suffering an ankle injury midway through their 2-1 Bundesliga win at Hoffenheim.

Ribery helped end Bayern’s league goal drought stretching back to August 20 when he weaved into the area and saw his curled drive palmed away by goalkeeper Daniel Haas, only for Thomas Mueller to tuck away the rebound just past the hour.

The club said the French international had twisted his ankle following his shot on goal but it was unclear if, or for how long, the midfielder would be out of action.

“I think his injury may be quite serious,” Bayern coach Louis van Gaal said.

“The first diagnosis does not look good. He could be out for a longer time,” Rummenigge said, speculating that it could be ligament-related.