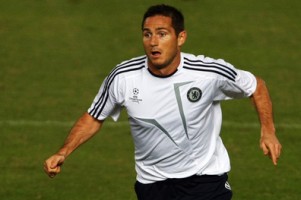 Chelsea midfielder Frank Lampard has said that there can be no excuses if they fail to win the Premiership title.

Defeat by Liverpool would hand the initiative to Manchester United, with Alex Ferguson’s team taking the field at the Stadium of Light knowing the Anfield outcome.

Lampard told reporters that : “When you don’t meet with success the disappointment is felt throughout the club.

“You take it personally as well. Failure doesn’t sit comfortably with me, it never has.

“For a club of Chelsea’s size and the investment that has taken place, failure to win a trophy is unacceptable.

“Last season was a disappointment in as much that we failed to deliver in the league and only managed to salvage something by winning the FA Cup.”

Lampard is well aware that Chelsea’s destiny remains in their own hands, with a home game against Wigan to come after the Anfield showdown.

“There can be no excuses,” he added. “We know if we win our last two games there is nothing Manchester United can do. We are focused and know what is at stake.”