It has been reported that former Chelsea midfielder Frank Lampard has signed for new MLS club New York City FC on a two-year contract. 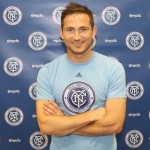 The England international midfielder became New York’s second major signing following the arrival of ex-Barcelona and Spain forward David Villa to the club which will join MLS next year.

The 36-year-old left Chelsea in June after 13 years with the London club where he won three Premier League titles, four FA Cups, two League Cups, the Europa League and the Champions League.

“It is a very exciting challenge for me in life terms. I had a fantastic 13 years with Chelsea that I can look back with pride upon. Having seen the vision here, seeing a real long-term plan, I wanted to be part of that. I want to carry on challenging myself and be a leader not only on the pitch,” Lampard told a news conference.