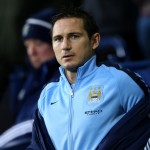 It has been reported that Manchester City midfielder Frank Lampard insists his intention remains to join New York City FC.

Initial reports in the summer had suggested that Lampard had signed a contract with NYCFC however it has since been confirmed that his agreement was with Manchester City owners, CFG.

The actions of City had drawn criticism from the MLS, with commissioner Don Garber describing the handling of the affair as an “error in judgement”. However Lampard made clear that the move had been agreed by all parties and that NYCFC were not treated as a lesser partner.

He said: “There has always been a constant dialogue between all parties in this time to find the best solution for everyone. I can say that I am very excited about arriving in New York and giving everything to the team to make us a success in the MLS as soon as possible.”

The MLS season is due to begin on 6 March meaning Lampard is likely to miss at least the first 13 games of NYCFC’s season.