It has been reported that Manchester City midfielder Frank Lampard is unhappy with criticism of Liverpool ace Raheem Sterling over his England controversy. 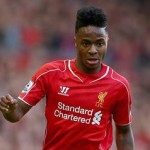 Sterling did not start England’s Euro 2016 qualifying win in Estonia on Sunday after telling manager Roy Hodgson that he felt tired.

Lampard told BBC Radio Five Live: “I think he is actually quite a brave boy to say, ‘You know what I am not quite at my best here’.

“I am actually quite upset, not with the manager as such, but that the aftermath has been a lot of people criticising Raheem Sterling – who is probably in the top two or three players in our country and we need him to be at his best – for making quite a brave decision.

“I think we need to get behind him. Whether it is right or wrong, I don’t know, but we are all individuals and he made that call.”